Yesterday, I received a rejection letter from a company to which I have applied for five different jobs.

It was a Christian company.

The first time they didn’t hire me, I wondered if they found me online and didn’t like my “brand” of Christianity, because they never even called me back. In the weeks that followed, I found myself pulling punches, editing myself into something they might like better, just in case they looked again. Reading those drafts, which thank God I didn’t post, is painful. My voice is fractured, boring and meanders all over the place.

I made myself into someone I’m not, so someone I don’t know would like me. Guess what? They still don’t.

Maybe it’s just the economy, but the point remains: I am useless to the world if I am lying about myself. I have learned from reading The Bible that I shouldn’t be domineering or offensive or aggressive, but do have to actually like who I am and not apologize for it – a topic I mulled over in yesterday’s post.

So I’m a Democrat and a yoga-teacher, and a thinker and a skeptic, who’s in love with organic farming, food politics and Jesus; and I don’t think those things are mutually exclusive. Watering any of that down to be palatable to everybody, just makes me bland, and that, I think, is an insult to God.

That’s the problem I had with Christianity forever. I believed I had to be a pious, churchy version of myself, and hose down the fiery parts that actually fuel the things I care about, like girls from poor families
sold by the busload into sexual slavery. Lots of religious folk trade in such phoniness, but Jesus does not.

In the gospels, Jesus prizes poor, marginalized women and will happily put my energy into their service, if I allow him to direct it; and surely the mind behind the aurora borealis can be trusted to handle that.

I believe there’s a juicy sweet spot in America populated by tons of people who would delight in the gospel if they actually could hear it, but if what they hear first is hell, the Law and a six-day creation, they’ll keep rejecting all of it and never know what good news the gospel really is.

So today, I’m changing the tagline on this blog to: Going to the Sea: A Sassy Democrat’s Guide to Faith.

This is who I am. Who are you? 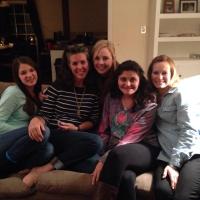