I have to put my dog to sleep today, and that is exactly as rotten as it sounds.

Tack is 14. There is cancer and there’s a chance he won’t even make it until the vet arrives at noon. Yes, Sam and I are the people who pay the farm call to have the vet come here. Tack is wrapped in a blanket in front of the fire and Sam has gone out to hire some guys. He needs his barn cleaned, new sand in the stalls and a hole dug behind the shop, right where we always watch the moon rise.

In a recent post about Christmas, I said that openly inhabiting joy and sorrow at the same time is a courageous gift you can give the people around you. So this morning, I didn’t go to work and Sam and I went out to feed the cows together. Every morning for the last 14 years, Tack has ridden shotgun with Sam to go feed the cows. He’s a cattle dog. It’s his job. Today, I went instead. Sam has hands like anvils, but a heart like goose down – especially when it comes to his animals.

Even though it is raining and cold, or perhaps for that reason, when we got to the far side of the ranch, the calves were running around playing. Watching them, it’s hard not to laugh. When calves run, they stick their tails in the air and they look like monkeys. Ever heard the expression high tailing it? Well, I think this is where it comes from. Sam knew this would make me laugh.

Then he reminded me of the time in Colorado the dogs chased a marmot into a twenty foot culvert. Tack stood at one end and barked into the hole, and was delighted to discover he’d invented a dog megaphone. I swear you could hear him barking for miles. Sam had to take a knee he was laughing so hard. If we’d filmed it, we could have won money on the funny home video show.

Our high country neighbors have equally funny stories because if Sam was ever around for drinks or dinner, Tack, Kota and Gracie were there too. One morning, just after sunrise, neighbor Deann came hauling down our driveway. She had Tack, smiling, ears flapping, in the back of her truck. Evidently he’d stayed over at her house, under her bedroom window, courting her girl dog all night. Of course, Deann thought this was awesome and stopped just long enough to boot his ass out of her truck.

We laughed about that later, after she got some sleep.

He can never nap alone.

Flannery O’Connor said, “I write, because I don’t know what I think until I read what I say,” and that’s probably the reason for this post. Also, if you see me a little low tomorrow you’ll already know why. I know some of you are praying for us. We feel it, and we’re grateful.

People keep asking me if we’re going to sell the ranch. My answer is always, “Yes, definitely, I mean I don’t know, probably maybe not, no, no way.”

This little ranch in Gorman Texas, is the dirt on which Sam and I landed after we took a flying leap out of our careers and lives in Colorado, minutes before the 2009 US recession and an historic Texas drought.

That ranch still mesmerizes me in the same way newborns mesmerize their sweaty, worn out mothers.

I forget, every time I come here, I have to scrub mouse poo out of my kitchen cabinets, and wash the silverware because – little known fact – mice don’t have bladders, so if you see mouse poo, guess what you don’t see? I know. Gross. You’re welcome.

I also forget that August in Gorman feels like July in Haiti, except Sam is there at six every morning, staring at me from the edge of our bed saying, “You ready?”

What he wants me ready for is the next nine hours during which I will scrape and paint the exterior of our 100-year old house, crawl around underneath it with the coon skeletons and snake skins or maybe just relax in the million-degree attic and watch for sparks among the old copper wires and cedar shakes.

Owning and restoring an historic home is so romantic when you’re married to an uber wealthy oil dude from Dallas – I assume.

But watching dusk fall last night, from two plastic chairs in the back of our old red barn, Sam said, “Are you sure you want to sell it?”

“Uh uh, ” he said kicking dirt that we’ve soaked with our own sweat.

This is the last place I saw my cousin Kelly. She galloped our grey mare Belle to the highest spot on the ranch with a morphine patch on her arm, one day after chemo. Six months later, she was gone.

This is the place with the oak trees, from which Sam hung a garden hose with a sprinkler head, so he can shower butt naked outside every day, like, you know, real men do.

This is the 60 year-old barn that held ten shivering horses during the hardest, coldest snowstorm we’d ever seen – not just in Texas, anywhere. 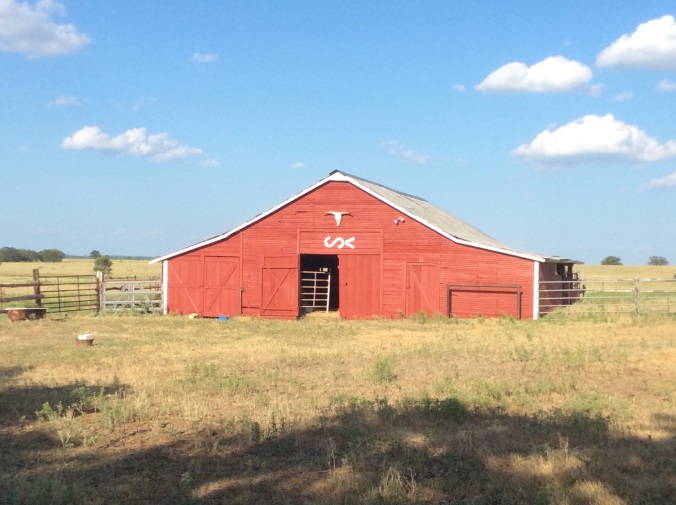 I learned to farm and sweat and weep here, and how sometimes getting everything you say you want can be the best and worst thing that ever happened to you.

Right now, I’m sitting in the room where Jesus introduced himself to me as the rock in rock bottom. For months, I sat here with the Bible in my lap, watching the West Texas sun rise, alternately daring and begging God to show up and be real.

He did, just like he promises. He poured through those tall, old windows like the yellow prairie light, and spoke in whispers and explosions that went off in my head and settled into my heart, layer upon layer like red sandstone in the desert.

How else could I respond? I spent the next year in this room, this chair, writing a 60,000-word love letter to thank him.

I’m marked and worn and striated by this place, and it’s hard to put a price on that. 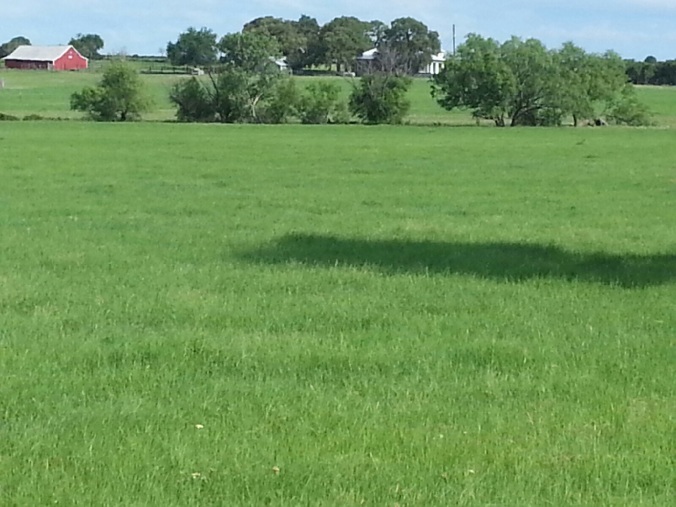 Yesterday, Ranch Manager Greg asked Sam and me to move some cows for him. Then, I think as a favor, he grabbed my all time favorite ranch horse, Rocket, out of the pasture and tacked a shoe back on him for me. Most any horse will do, but for years, when there was cow work to be done on the ranch, Rocket was always my pick.

Colorado cows don’t come to the bucket like Texas cows do. At least ours never did. Plus, the ranch is an obstacle course of hills, rivers, timber and bogs.

Sam and I are into the slow and easy method of moving herds, none of this galloping in, whistlin, and a hollerin’ nonsense you sometimes see in the movies.

But Rocket chomps at the bit – literally. Holding the herd, he glares at them and from the saddle you can hear him clacking and grinding his teeth. Rocket is cow horse to the bone.

A grey wall rolled in up ahead and lightning tore into the peaks to the north. So with our friend Deann helping, we began pushing about 50 mama cows and their calves down past our old house, over a couple hills and along the fence line toward the open gate.

As we got there, the cows balled up still not seeing the hole. I noticed a red horned cow that had led the rest of the girls pretty steadily from the lower pasture. She was eyeballing the creek and the wide open space on the other side of me. From the back Sam yelled, “watch that red cow, she’s a lead cow.”

Before I could even smile at the resurgence of Sam’s and my psychic cow working rhythms, Rocket spun, darted into the creek and punched that old, red cow back into the herd.

I didn’t even touch him.

This is why people buy foundation bred Quarter Horses and spend their lives showing them. It is incredibly fun when four brains – one bovine, one equine and two human – consider the same situation at precisely the same moment. It’s even more fun when the equine brain beats the human brain to doing something about it.

That’s why Sam does this. 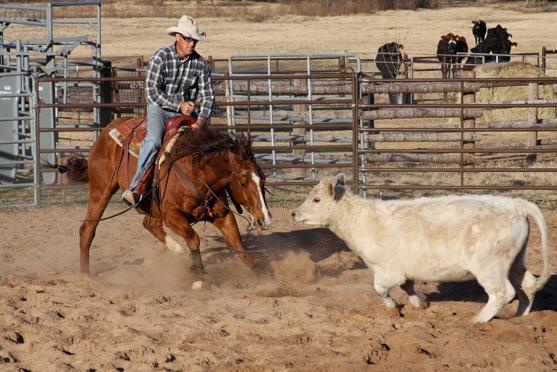 No point to this post really, other than to say how grateful I am for fast horses, good cowboys and mountains without end.