Sam and I went to a funeral this week for one of my best yoga students.

She died on Tuesday at age 98. So Sam and I hopped in the truck at dawn and drove back to windy West Texas where the mesquite and post oaks grow.

I met Aline Garrett when she was 92, after I decided to offer a “chair yoga” class to the ladies who live in the local senior apartments. I wrote about it in 2011.

I had no idea what I was doing teaching yoga to people who may have been alive during World War I, so at our first class, as six slow-moving, Texas farm-wives gathered around, ready to learn yoga, I said,

“Does anybody have medical issues I should know about?”

They looked at each other and immediately I thought: Oh man what did I just say, we only have an hour.

92-year-old Aline, with her grey hair wound into a tiny bun atop her head, thought on it a minute, then held up her right index finger and said,

“My finger is crooked.” Then she giggled.

With that one comment Aline Garrett set the tone for the class forever. We met twice a week and she never missed one. Soon, I started calling her Ms. G and decided, if I get to be 98, I want to be just like her. 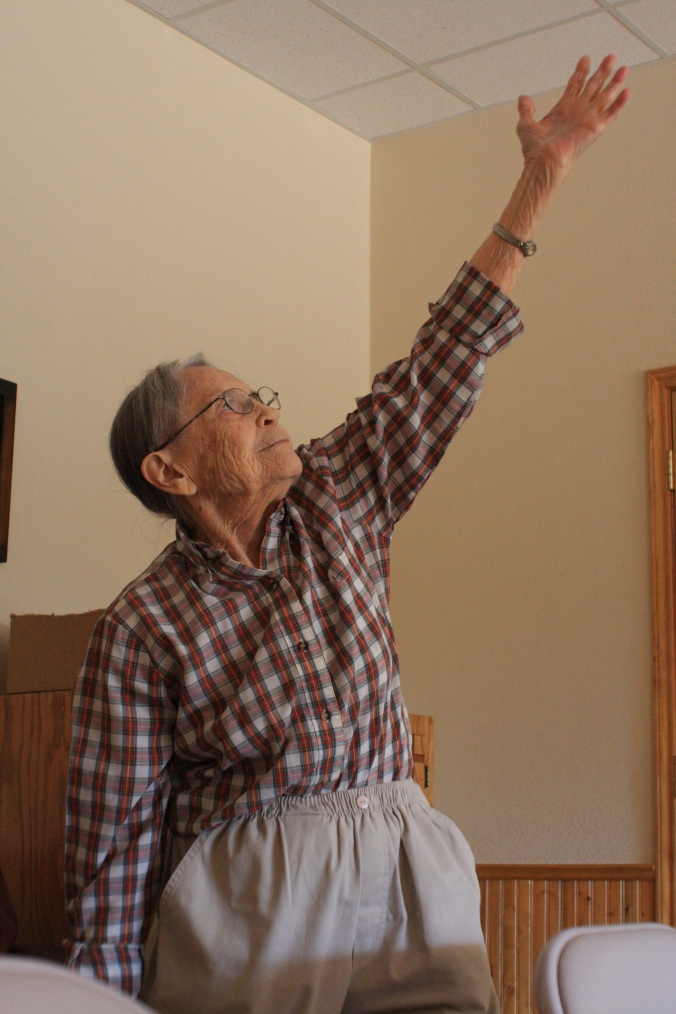 At the funeral home on Thursday, her family sat behind one screened in area, as a Bluegrass trio sang hymns from behind another.

Old-fashioned decorum is alive and well in West Texas farm towns, and it pleased me to think Ms. G was probably bluegrass before bluegrass was cool. I found myself nodding again and again as her 34-year-old Church of Christ pastor shared, with deep knowing, all the things that were great about her.

Without hyperbole or preacher theatrics, he compared her to the Apostle Paul.

I have learned to be content regardless of my circumstances. I know how to live humbly, and I know how to abound. I am accustomed to any and every situation—to being filled and being hungry, to having plenty and having need, and I can do all things through Christ who gives me strength. Philippians 4:11-13

Seriously, that is no small thing, but I think she would have just smiled and shook her head.

I remember sitting with Ms. G at her daughter Aletha’s house, which sat across a big coastal field from ours. 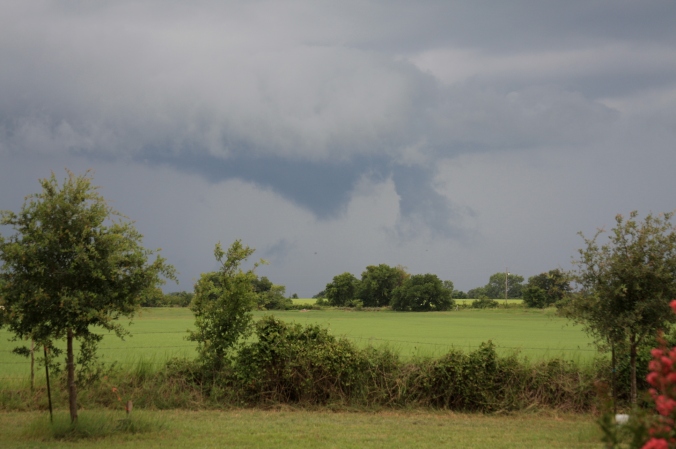 This was probably a tornado, but that’s not the point.

We were shelling peas at the kitchen counter, when Ms. G began to talk about the Great Depression, and how for Christmas one year, she and her siblings each got an onion.

“Oh and we were happy to have it,” she said.

When she was in her 80’s she flew on an airplane for the first time. She said they gave her a bottle of champagne, announced it over the PA and let her see the cockpit. “Now that was high cotton,” she said clapping her hands and smiling.

Both events seemed to delight her equally.

In the few years I knew her, I never heard Ms. G say a negative thing about a person or event. Ever. If people were speaking negatively around her, she would look at her hands and sit quietly.

She also loved to read, but when we met she was going blind. Rather than mope and complain about that, she began to memorize long passages of scripture, so she would always have it, even if she couldn’t see it.

Some of her buddies, who were mine too from yoga class, came to the funeral. Although, I haven’t seen them in five years, they treated me like I’d only been on vacation. Bernice squeezed me for a very long time.

Betty, me and Bernice

This is also how I want to be in the world. Because if you’ve ever mattered to me, you probably still do, despite space and time. Ms. G was like that. She never forgot anybody.

Later,  we gathered at Durwood and Aletha’s for coffee at 4 in the afternoon, just like we used to. There were a pile of new great-grandkids playing in the living room and people rocking in chairs.

Despite having lived in that old farmhouse across the field for only two years, I can think of few places where Sam and I are as woven into family and community as we are in Gorman, Texas. I didn’t realize how precious that is.

Aletha, who is her mother’s daughter to the bone, said to me through tears as we hugged goodbye, “Mother would have loved this, because this is the stuff that matters.”

Truly, it’s not easy to pinpoint what I love most about Dalhart Texas. But if you press me on the matter, I’m going to say it’s the Nursanickel Motel across from the Toot -n- Totem Truckstop.

A gal can always count on the Nursanickel Motel, especially when that gal is supposed to be in Amarillo, Texas by now eating a 72-ounce steak in thirty minutes or less trying to get it free, at The Big Texan.

But no, Sam and I are like moths to Dalhart’s flame. Limping into town on five wheels instead of six, having blown a duel between the feedlots and the cornfields, west of Dalhart, The Nursanickel came to our rescue.

The last time we were here Sam either got food poisoning or the stomach flu and was projectile vomiting with a measure of flair and, frankly, volume heretofore unseen in West Texas.

Because we were heading to a horse sale, we were hauling his big truck and trailer, so we had to park around the corner. We weren’t even married yet, and I drove it in to town. That’s how sick Sam was. Walking down a side alley to The Nursanickel, he fell to the ground and I thought, “oh great, now how am I supposed to pick up and carry 225 lbs of vomiting cowboy.”

Horrified, I called my mom from The Nursanickel saying, “I think Sam got food poisoning from some bad prime rib, should I take him to the emergency room?”

I heard my dad ask from the background.

Sympathy isn’t Mike Quirk’s strong suit, but since when Sam is sick, he doesn’t just vomit, he shout/vomits, I thought the emergency room might be in order.

Quickly, I suggested to Nursanickel staff they not sell the rooms nearby. They were kind and accommodating as West Texans are and suggested I give him pickle juice. Jane Quirk suggested ibuprofen and rest. Sam asked for Pepsi and though I told him it was a bad idea, he drank it anyway and immediately shout/vomited it up.

So, like I said, Dalhart has a lot of good memories for me.

After two weeks in the mountains, you could blindfold me and I’d still know I’m back in Texas: 1. I’m sweating. 2. Our waitress called me Hon and 3. She laughed and said “raaaahht” when I made a joke.

I think God sometimes uses the completely inexplicable events in our lives to point us toward Him. – Bob Goff, Love Does. 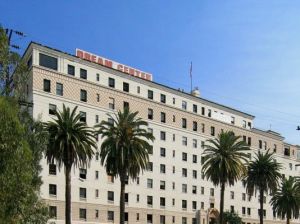 I blog in a time warp.

The book I’m finishing, Going to The Sea – A Sassy Liberal Wades In With Jesus, follows a cynical, selfish but well-intentioned Left Coast girl, who submits to Jesus on a West Texas gravel road.

But Going to the Sea – The Blog lives three years down that road, where the inexplicable things of God happen all the time, in present tense.

Inexplicable things, like my decision to fly to LA next week to embed with the Los Angeles Dream Center‘s missionary teams.

Me, a Christian missionary? Come on. Yah, I don’t really get it either.

I’ve blogged about The Dream Center before, but on Monday, I’ll put some actual skin in the game, in Watts, South Central, Compton, Imperial Courts, Crenshaw and Downtown L.A. This is inexplicable apart from God. This is what happens when you follow Jesus like you mean it. He messes with who you think you are and has you doing things you cannot imagine.

Here’s how the Dream Center explains what I’ll be up to next week:

If you made a mission trip to the LA Dream Center, playing with
neglected and abused kids in gang infested neighborhoods, busing
people to church from crack houses and cardboard boxes, handing
out warm plates of food to homeless people living on Skid Row,
would be a few evangelistic opportunities your team would take
part in…

With us you would be working hard, praying loud and returning
home exhausted. With us, you would be an important part of the
miracle for which we ourselves can take absolutely no credit.

Pay close attention, The Dream Center deals in the inexplicable things of God, like banks deal in money. God willing, I’m going to show you some of them, right here in real time.

Oh, and if you’re the praying kind, let ‘er rip, I need all the help I can get. 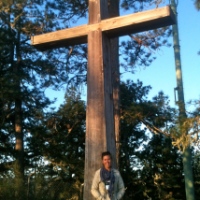