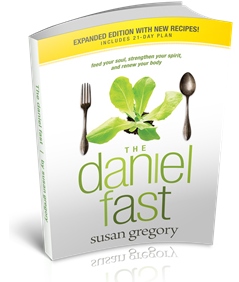 Last week I became a vegan and I live in Texas.

As you might already know, meat raising, preparation and consumption is basically a sacrament in Texas, so a decision to quit eating it casts immediate suspicion about infiltration by tree-hugging, West Coast liberals.

Mention that you quit sugar, dairy, eggs, caffeine and alcohol too and you might as well tell folks you walked precincts for Obama.

But as labels go, I’m a Jesus-freak too and he’s the reason I started the 21-day Daniel Fast.

When I began reading the Bible three years ago, I decided there was present-tense value in doing what it says. As I kept reading and studying, I developed some control over what comes out of my mouth, but I still struggle with what goes in it. When it comes to what I eat, my squealing, whining, impulsive, thoughtless, unconscious human nature is still well in control. Christians call this “the flesh.”

Because I’m a yoga instructor, organic farmer and lover of food politics, I know what to eat and I can go ages doing it well, but when I go off the rails look out; it’s a spectacular, nutritional train wreck that can smoulder for months. And Texas is the penny on the tracks.

I know I can’t eat dessert at every meal, but at a gathering where Texas women are putting on the dog, turning out warm peach cobbler, German Chocolate cake and coconut pies from the kitchen, seriously, who can resist that?

Crispy, greasy french fries and beer go with the state’s famed barbecue like Captain goes with Tenille, and the portion sizes…please…especially at Tex-Mex joints,  food nearly falls off plates the size of hub caps.

And all of it makes my jeans shrink.

But more troubling is my habit of absorbing all of my husband’s anxiety and calming myself down by blankly staring at the refrigerator door and shoving cupcakes in my mouth.

Sprinkles Cupcakes in Dallas is torture because I fear I will choose wrongly between red velvet, lemon or salted caramel, so if nobody’s looking I buy all three.

Luckily I’m 5’9″ and have kind of gotten away with this behavior for years, but now I’m 40 and let’s not kid about what happens to 40 year-old women with cupcake issues.

Fasting is about discipline and consecration, sweeping the decks of useless clutter. It uses physical hunger to bring quiet awareness to spiritual hunger.

This fast is based on the Jewish Prophet Daniel who, while conscripted by the Babylonian king, refused to eat rich, palace food. Daniel lived on water and only things that grew from seed. The Bible says he thrived.

So for ten days, I’ve done just that. Here’s what I’ve learned:

1. It’s not about the weight. It’s about poking around in the dark rooms I’d rather you not see, the ones where I can hide, pound cupcakes and loll around in pools of self-loathing. In those secret rooms, fear, depression and anxiety tell me “don’t worry, you deserve it. As long as nobody sees it, it’s not a problem.” Whoa. Thank God I don’t love alcohol like I do cupcakes.

I realize that’s a lot to unpack, so we’ll talk more later, but the point is, I don’t believe those crappy lies in other areas of my life anymore. Why in this one?

2. Praying hard ahead of time is a good idea. Here was mine: “Lord, you know I suck at this, and if you don’t help me, I will quit in three days, so please help me.” Today is day ten, and it’s evidence of the Holy Spirit that it really hasn’t been that hard.

3. Cattlemen like Sam Kirk don’t want to be vegans. They will ask at every meal, “where’s the meat?” to ensure you aren’t tricking them with tofu. So planning meals for everybody ahead of time is crucial. The book is helpful in this regard.

Do you struggle with your eating too? What triggers it? What do you do about it?

It’s been one of those weeks and it’s only Wednesday.

My baby dog of nine years, Gracie, is lying at my feet with labored breathing and full-body swelling that four days in the doggie hospital couldn’t sort out.

Baby Grace and me in Colorado

Sam brought Gracie home for me as a present even before we were married, and although she rides with him every day in the front seat of the Ranger, like a little canine Lieutenant, she is my dog.

This morning at daylight, Sam and I had to work calves. For the first time in history, Gracie couldn’t go. Moving cattle hither and yon is her life’s work and even though she chewed the moulding off the kitchen door trying to prove she was up to the task, I know better. She is bad sick and nobody knows why.

Concurrently, I have a stuff coming up I need a little help with, not the least of which is the direction of this blog. So I decided to fast for a few weeks and try to get a little clarity.

Fasting is a spiritual practice that I’d never really tried, except when I gave up coffee for Lent. Since I did that successfully I figured I might try the three-week Daniel Fast. I’m on day three and having a hard time staying off the couch.

There’s a lot more to say about fasting and I will after I spend three weeks eating like a vegan monk at AA – no sugar, no coffee, no alcohol, only water and things that grow from seed. I noticed recently that I control what comes out of my mouth a lot better than I what goes in it and it’s a problem. So more on that later.

But most importantly, I had a long, discouraging email exchange with a potential literary agent yesterday. She said she would like to represent my work but my platform (code for how famous you are blog, Twitter, etc) is too darn small.

I can’t help but think of all the Kardashian-esque ways to fix that problem but that approach is a little incompatible with my work. Plus, Sam and I are old. So, you know, that’s out.

Hopefully, this low, hungry time, where I lay on the floor and pray for my dog, will be the rainstorm I need to rinse away all the non-essentials and come up sparkly and clean. That way we can get down to the way things are, just as fast as we can.